Tis the season, for Pumpkins!! 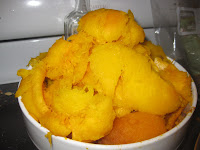 How to make your own pumpkin puree vs. store-bought, canned pumpkin

.  Some people cut theirs in pieces–but that is just way too much cutting in  my opinion, why increase your risk for lost appendages?  You cover the pumpkin halves with aluminum foil, and place them in the oven at about 350 for about an hour or so.  You want them to be tender enough so the “guts” scrape right out and away from the skin.  You may also choose to sprinkle cinnamon, nutmeg, allspice or pumpkin spice inside the halves before you put them in the oven.  This is not necessarily for taste reasons, but it makes your house smell so yummy. 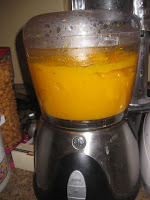 After the pumpkins are baked, carefully take them out of the oven, and while they are still hot–use a potholder and hang on to them as you scoop out the insides.  I left the other pieces in the oven until I was ready to scrape those also.

Then you will simply place the pieces of, “guts,” into your food processor or blender even–and blend until it looks like baby food.  The puree will be much lighter than the can-version, so don’t be alarmed.  I think all their additives make it darker?   Then you will need to pour or scoop the puree into a storage container.  I have found that the quart ziploc bags work the best-because they hold exactly 2 cups, which is about how much is in a can of pumpkin puree at the store.  Lay them flat so they freeze nicely.  I did not have quart ziplocs when I made this batch, so I used gallon bags.  It worked fine, I will just have to measure as I go. 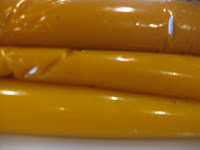 My 3 pie pumpkins made approx 1/2 gallon each- I put them into 3 bags, so they would lay flat and freeze well.  I only froze 2, because I plan on making something pumpkin this week yet!  Also, it works nicely if you have a 2nd person holding the bag as you fill them.  My husband did that for me last year–but this year he wasn’t here–and I missed that extra help.

Also, if you are in the Halloween mood–you can make the kids mummy hot dogs.  It’s very simple to do–and takes very little time.  You purchase pizza dough in a can, and unroll it.  Cut off thin strips of the dough–and roll it between your hands so it creates a “snake.”  Then wrap the hot dog like a mummy, leaving space for his face to peek out.  Bake at 350 until the dough looks golden brown on the edges.  I added mustard-eyes and a ketchup-smile.  The kids loved them, but since they had no idea what a, “mummy,” was–they called them, “mommy-dogs.”  So, apparently, I must walk around the house wrapped in pizza dough? 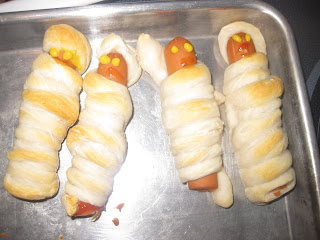 Don’t get spooked by  the 3rd Mummy who looks as if he is coming, “unraveled.”