For a get-together we had at our house–I wanted to make something a little different, bite-sized, and full of as much flavor as a full-sized brownie.

So, I decided to make brownie balls- or bites…whatever you want to call them. 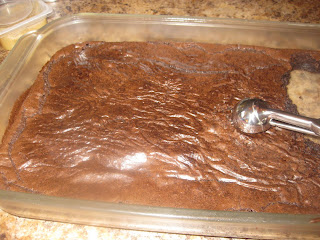 I made brownies, the old-fashioned way in a 9×13 pan.   After the brownies were baked, I let them cool for just a bit–and then started to scoop out the middle of the pan with a small cookie scoop.  I used the 1tbs sized one.  I stayed away from the edges, because of their crunchiness–but they did not go uneaten 🙂

After scooping, I rolled the brownie into a ball- and then dipped it into almond bark. Then I sprinkled the almond bark with toffee chips.  As the almond bark was running low, I decided to just drizzle the rest, which I think wound up looking the prettiest. 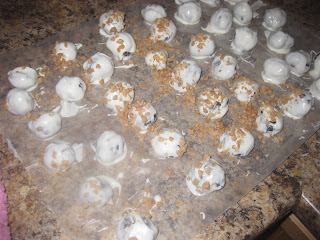 These turned out looking like truffles–but, were almost better!  Of course, comparing truffles and brownies is almost impossible–since both are so yummy, but in different ways. 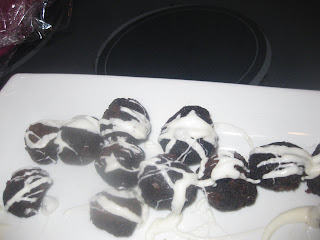 These disappeared FAST–and when I say fast– I mean VERY, very, VERY fast!  I will definitely make these simple, decadent, little balls of goodness again.

My next thought, is actually doing something  very similar with cake. Hmmm…