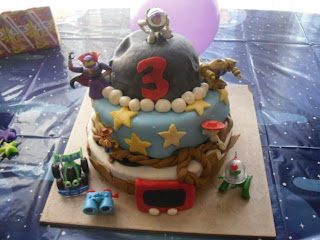 It was Jaxen’s 3rd Birthday–and we were having a Party.  He wanted a Buzz Lightyear Party, and naturally– I thought I would make the cake.  I started doing online searches for cool cakes, and found a million and one rocket ships–but, I just wasn’t impressed.

Then, I saw the idea for a tiered cake–what a great idea!  I had never done a tiered cake before, but I never let that stop me from trying something.  The cake was also covered in fondant– which I had never successfully done anything like that before either.  Still, I was undeterred.

Then, the unspeakable happened–everyone in our household came down with a nasty stomach virus the week of the party–and with much hesitation, I started to call the bakeries.  Unfortunatley, there were no bakeries with, “Toy Story,” themed cakes.  They offered to print a picture, and put it on a sheet cake for me…but, if you know me…you know that was NOT going to happen!

So, I hoped like crazy, and started the cake on Friday.  I realized at this point, that our round cake pans had been misplaced or left at an event of some sort–(still need to shop for those).  So, we borrowed 9” cake pans from a neighbor, and the first tier was baked.  The top tier, was to look like the mooon- so, I baked some cake in my Pampered Chef Batter Bowl.  This was the first time I ever baked a cake in a bowl, also–

The bowl cake turned out fine, and all I needed now was a smaller cake for the middle tier.  I decided to start my first batch of fondant, so that if it didn’t turn out, I could buy “already-made” fondant at the store, when I went.

I used the following recipe for fondant–and boy was it a life saver!!  I had tried a marshmallow fondant, once before–from Allrecipes, and it was a flop.  Chalk it up to inexperience or not enough crisco–the Allrecipes recipe failed me.  This marshmallow recipe, however, did NOT fail– It was amazing and easy!

The pointers I found useful, were too grease your hands and counter like crazy–and pop the fondant in the microwave for a couple of seconds if it gets hard to work with. If it gets too mushy, add more powdered sugar, and if it starts to crack (mine never really did)- add the tiniest bit of water.

The only difficulty I had was blending in the colors, or making the black dark enough.  With the first batch of fondant, I covered the first and third tier, as well as made the stars for the 2nd tier and the fence and rope for decoration.

Then, I headed to the store for a smaller round cake pan and black fondant–because I just couldn’t make mine dark enough.  I went to Wal-mart, and weirdly enough they were sold out of fondant and small cake pans.  So, it was off to Hobby Lobby–where they ALWAYS have what I need, plus some!

I found my pan, and I decided that since the fondant only came in sets of colors–that I would just use black frosting for the small parts of black I needed.  I also made a stop at Target, to get more marshmallows and the toys to decorate the cake.  This was the most expensive part of the cake, coincidentally.

After what seemed like the longest trip ever, I was back at home to finish the cake.  I baked the middle tier in my new cake pan–which was extra deep, so that I only had to bake one cake instead of 2 layers to make one tier.  Then I started the new batch of fondant– which turned out perfectly, again~! Thank goodness!

When all tiers were covered fondant, and decorated- I could finally stack them.  I wasn’t sure if I needed boards or dowels or what exactly– so I used 1 dowel, which turned out was probably not enough- because the cakes did start to fall in just the tiniest bit by the next day.  Also, I should have waited to put the, “cow-spots” on because most of them were covered by the 2nd tier and the rope.

The first tier was covered in white fondant, with black frosting spots to make it look like cowhide, and then had fondant fence around it.  The 2nd tier was covered in blue fondant with yellow fondant stars, stuck on w/ a little water.  This tier also had a fondant rope around it.  The final tier, was the moon–complete w/ divets made with a cookie scoop, and covered with grey fondant. Toys were added, and a fondant etch-a-sketch and #3 was made for decorations.  The cake was put up high on the fridge, to keep little hands away from it…and it lasted til the party–and was a huge success.  Oh, and the fondant tasted great–just like marshmallows.  A good friend of mine, came over–and couldn’t stop eating it~ She also got to help me some of the final decorating–

I am in no rush to try another tiered cake w/ fondant–but, I do see another one in my future…*don’t tell my husband 😉