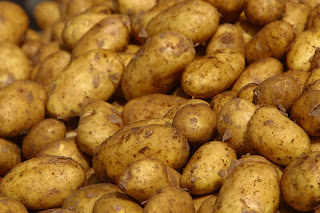 I guess in December, I took advantage of 99cent bags of potatoes one too many times–because my pantry was overflowing with taters.  Since, I also had some cooked ham- I decided to throw together a simple potato soup.  However, I thought the taste was anything but simple– since, I didn’t write the recipe down as I went- I will try my best to remember exactly went into the potato soup, I can’t stop eating! Throw all into a crock pot and cook for 4-6 hours.  May need to add spices to taste–since I didn’t really measure–I am only estimating the amounts

Top with cheese and serve with fresh bread.  Yummy