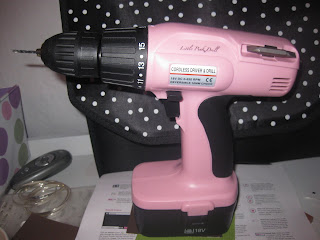 Although, I am sure my DH was fearful when I received a PINK DRILL for Christmas–I was beyond excited.  I did a few things around the house, like installing an under-the-counter cd player and hanging up pictures–and then I took my drill to it’s resting spot.  (My craft room)
It wasn’t but a day or two later, that I broke it in on my first craft.  I had a wooden frame, that had been lying around for years– literally.  It was one of those cheap ones, I picked up at the Dollar Tree.  I decided, that I would make it extra special–and maybe worth $2 instead of $1 and add a calendar to it.
I took out the Lil Pink Drill–which btw is not little–it is more volts than my husbands drill, (and yes, he was a little jealous).  My plan was to drill 2 holes in the bottom of the frame, to then put hooks in which the calendar would hang from.
I pressed the drill bit up to the wooden frame, when I thought it might be a good idea to take the glass out of the frame.  (Which is exactly what frightens the daylights out of my husband about me having a drill).  I took the glass out, and then drilled 2 holes.  *yes I measured first.
I then put the hooks in the frame.  I took cardstock and made calendar backs, and punched holes in all of them at once with my BIG BITE crop-a-dile.  Then, all there was left to do was print off a calendar to put months on the cardstock.
My husband can now hang a photo-filled frame, that doubles as a calendar in his office–and everytime he looks at it he can think of me, drilling holes in everything I can find. 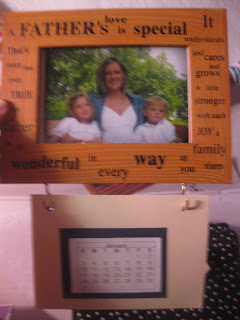