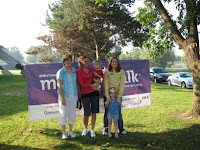 My mom has a very giving heart, she loves to give, give, give.  She is constantly thinking of others when she is out and about, and picking up something that they would love-  The two people she does this the most for is her 2 grandkids– which both belong to me.  There isn’t a time that she sees them, that she doesn’t have a surprise for both of them.  It could be Hannah Montana candy, clothes, or decorations for their room.  She also gives me things–random things for me do to, “something,” with– it could be craft related or home decor- But, this past weekend she brought me Bulgar Wheat.   She had purchased it for a recipe, and didn’t care for the recipe–so in a way she challenged me to find something to make with it–and, I was up for the challenge!

I found a lot of recipes that sounded rather– yucky–.  Then, I thought that since it was wheat– it should be good in a bread.  However, since it was pretty course it would need to soften a little–and it would need something sweet to digress the eater from the healthy qualities of the bread. 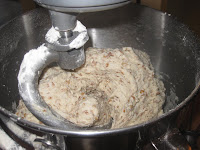 Combine bulgar, boiling water, honey, oil and salt in large bowl. Cool to lukewarm. Add yeast to warm water and let stand a few minutes. Stir to dissolve. Add to bulgar-honey mixture. Blend in flour in 3 parts beating after each addition until dough leaves sides of bowl. (Dough will be soft)Turn onto lightly floured surface. Knead until smooth, elastic and does not stick when punched with fingers (about 5 minutes). Place in greased bowl turning to grease all sides. Cover with waxed paper and then a towel. Let rise in warm place until double in bulk (about 2 hours). Punch down and divide dough in half. Shape into loaves.
Place in greased 9x5x3 loaf pans. Cover and let rise until doubled (about 1 hour). Bake at 350 degree oven 45-50 minutes. 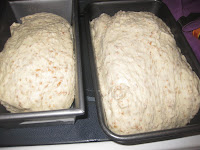 At first I was going to make 1/2 this much–but, I screwed up on my salt and oil–and had to make twice as much-  I still just made 2 loaves–but, they were BIG loaves!  Also, I got new yeast, because I had been suspecting my other yeast (which I bought in bulk) was not working any longer–and evidently I was correct- because this bread rose like crazy! 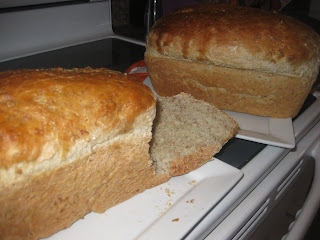 If you are a health-food lover, you will love this bread!  It is hearty with a hint of sweetness.  I love the texture that the wheat creates.  I will be rotating this in, with the breads that I make–at least until my bulgar wheat is gone! Also, it tastes great with homemade apple butter—which is good, because I made another batch with the leftover apples!

Thanks again mom, for the bulgar wheat!